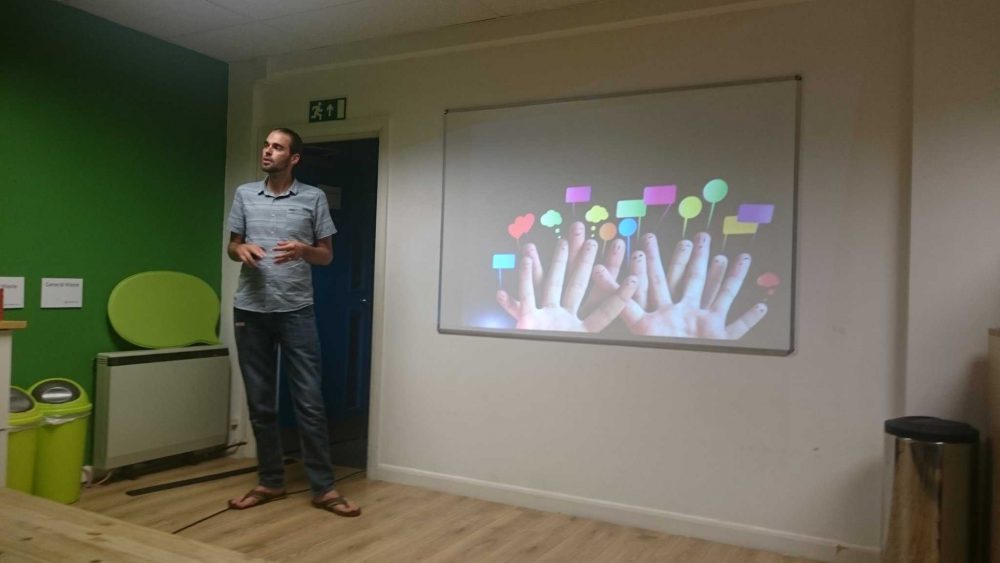 At the August 2016 Plymouth JS meetup I gave my first ever public talk. The twenty minute talk, titled ‘Once…. Twice…. Three times a programmer: A journey through to modern web APIs’ was a brief overview of my path to becoming a web developer. I told it through the lens of the communities I’ve been a part of over the years and how they’ve nudged me along my way. I had great fun preparing and giving the talk, and am proud that I had conquered a personal demon of mine whilst launching my first ever Crowdfund.

Over the three years of being a Uni student, the only area that I feel I’d failed was in public speaking and giving presentations. I had two opportunities for speaking in front of a group students as part of my studies. One of them I ducked out of completely, in part because of the teams disorganisation. The other I feel I didn’t perform all that well. Sure, I stood in front of people and spoke for close to three minutes. However it was rushed, recited and wooden. In essence, I was the typical beginner. I felt at the time that my perceived bad experience meant I was destined to avoid the stage.

In contrast, the talk I gave at Plymouth JS was amazing….. In my eyes at least. I was talking about a few connected subjects wrapped up in a personal story. I gave myself plenty of time to plan, prepare and rehearse, making sure the few punch lines were timed right. I gave the presentation to a couple of people (and palm trees) in the run up which provided loads of great feedback. From the people at least.

I’m a great believer that you should play to your strengths and concentrate on what they can give you, rather than worrying about your weaknesses. This is an exception. I realised that my ‘poor’ performance previously was down to inexperience and nothing else. I read a few books on the subject, looking for the common themes, and studied the speakers on YouTube and in my community who I look up to and respect.

I now know that I can present in front of any audience, given the right amount of preparation and practice. Sure, it’ll be a year or two before I make my Agile on the Beach debut, but I’ll get there. In the meantime it’s opened up a few potential opportunities. There has been a recent trend in micro funding pitches, such as the GAINInBusiness Soup events in Plymouth. With plenty of business ideas floating around in my head and the impending end to Student life, I’m sure I’ll be appearing on that stage for funding some time in the future.

If you’re unsure about talking in public I highly recommend just doing it. Even if you fail completely, which is almost impossible with enough preparation, you’ll cement your understanding of your topic. Try to find a meetup in your local community and talk there. Knowing some faces in the crowd will help to settle your nerves on the day. If I were to talk to myself at the start of my preparation I’d give the following five pieces of advice:

I’d like to thank my community for encouraging me to give the talk in the first place. If it wasn’t for a conversation over cocktails with Chris Hunt and Rebecca Veater I’d of never even contemplated it. The best kind of communities are those that encourage you to better yourself. I’m really lucky to hang out with such an amazing group of people. Thank you also to Sophie, the love of my life, for hearing me give the talk many times…. on multiple continents.